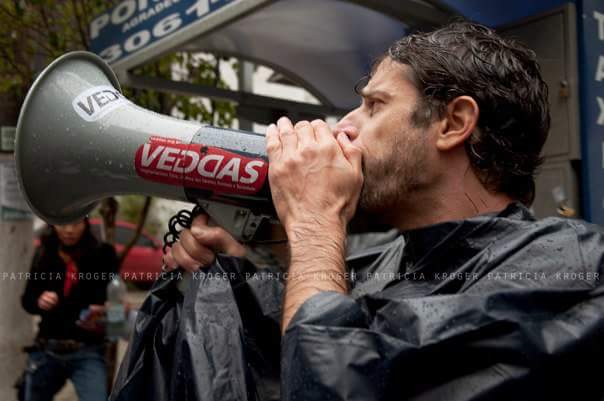 George Guimaraes is a vegan dietitian and animal rights activist in Brazil. As a dietitian, his practice is dedicated to the research of vegetarian diets and counseling of vegan/vegetarian patients through NUTRIVEG Consulting on Vegetarian Nutrition. He is also a regular lecturer at universities and events for the general public and contributes regularly as a writer. Guimaraes is also a dedicated activist, founder and president of VEDDAS (Ethical Vegetarianism, Animal Rights Defense and Society), the most active animal rights organization in Brazil. VEDDAS promotes vegan outreach through educational activities and weekly multimedia interventions on the streets and organizes protests and events on issues ranging from vivisection to animal farming and animal entertainment. VEDDAS is the organizer of the National Animal Rights Gathering congregating hundreds of activists from Brazil and abroad on a single location for four days to immerse, share and learn with one another. With its permanent weekly activities added to the its timely ations, VEDDAS has carried out in 2013 alone 406 actions across different cities in Brazil and is aiming for even more in 2014. Its main focus for the semester has been in mobilizing in the streets to try and stop a legislation (PL 6602/13) that deprives animals in laboratories of its current legal protection. With an intersectional approach, VEDDAS was actively engaged in the campaign to stop the construction of the Belo Monte dam in the Amazon, a campaign that has led to the assassination of tens of activists in recent years. George frequently speaks at animal rights events worldwide and took part on the crew of Sea Shepherd`s flagship the Steve Irwin on the 2010-2011 Antartic campaign.